Beautiful HTTYD fanart, with fresh and open scenery where generally friendly dragons would feel at home – wide open spaces and natural beauty all around.

There are quite a lot of places on our planet, that look like they could be home to HTTYD’s dragons. In fact, in nearly every civilisation throughout history, even going back thousands of years, there appears to have been some kind of mention of dragon-like creatures. These dragons can be divided into two major groups/types: the Western dragons and the Eastern (Asian) dragons.
Throughout Western history, the mythical dragons were rarely considered to be a good omen, or sign of something positive – satan himself is described in The Bible as a dragon. However, Eastern (Asian) cultures generally saw dragons as something positive and wise.

Despite the differing interpretations of what dragons represent, it’s quite fascinating that so many different and far apart cultures around the world, shared stories of such creatures. To varying degrees, all humans around the world and throughout history, shared the same good and evil, virtues and vices, etc. It makes sense that we would try and explain and understand such profound things, in similar ways.

Looking at the HTTYD movies however, one might come under the impression that dragons were merely misunderstood benevolent friends/pets, who simply required more “give” and better treatment by humans “enlightened” enough to know this.
[MOUSE CUDDLING UP TO CAT] This seems to be a popular theme amongst major movie studios: to make feared, primitive and destructive creatures such as “monsters”, “dragons” and “vampires” (effigies of evil/death/destruction) acceptable and even friendly/desirable to the impressionable (young and innocent) human being.
The dragons of Western cultures mostly acted in destructive/evil/selfish ways, so in contrast, it seems for the HTTYD movie franchise the Western dragons were given an Eastern dragon makeover, personality-wise. The final “HTTYD: The Hidden World” movie seems to have borrowed heavily from the Chinese myth of dragons and dragon kings living beneath the sea.

The original HTTYD book series didn’t hold back in pointing out, that the Western dragons (of the story) were in no way cuddly pets, but were in fact generally selfish, dangerous and stubborn – like wild animals (but often with more brainpower, aggression and intelligence).
However, these difficult and sometimes deadly creatures could still become allies, when there was mutual understanding and respect. There is realistic wisdom and expectation in such a message.
We can’t always choose who we share our world with, but we can continually work towards becoming our personal best, encourage those around us to do the same, and perhaps most importantly – expect to be treated like oneself treats others.

Whether the mythical dragons of the HTTYD movie/book story were just misunderstood best buddies and pets, or often dangerous sentient creatures with their own selfishness, limitations and faults, the places they’d inhabit would remain the same – the human world around us.

It is a comforting thought to imagine, that the dangerous, feared and reviled elements that inhabit our current-day world, could be lived with in peace and even mutual understanding and benefit. Showing that such a thing may be possible, if only for a moment, undoubtedly contributed to the success of the overall HTTYD story. Young kids know from a certain age that there are negative/destructive elements around them, and they want to know that it’s possible to be protected from those elements.
A number of people who worked on the HTTYD movies traveled to various Nordic locations, to get a feel of the environment, take pictures and help make their movies more realistic.

Ultimately, the beauty of the imagined peace and harmony can clash with the reality of life experience. There are no actual dragons today, and there never were in the past (or were there, haha

).
However, the beauty of the mythical dragons’ real-world surroundings, as well as the hope for peace and harmony within the hearts of many human beings, is not a fairytale but the reality, and truth.

Whatever meanings we associate with the dragons, we live in a world that can still have moments and places as beautiful in reality, as any wondrous fairytale. Our real world, still has fragments of great beauty and hope, worth preserving.

The following HTTYD fanart shows off beautiful places and scenes, that look like they could still exist in real life: 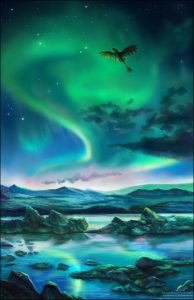 Click on a picture to see it pop up in a “lightbox”. Pictures posted in no particular order. (Featured art: Touch the Stars – by Red-IzaK)

Toothless flying through the night sky, with an Aurora lighting up the surrounding landscape. Quite a stunning scene, and it’s nice to know that the artist has actually referenced this digital painting from a photo of a real place – the Jökulsárlón Glacier Lagoon in Iceland.
This sure looks like a place where dragons (had they existed) may once have flown.

Either this painting shows Toothless flying before he had met Hiccup, or after Toothles had received his prosthetic tail fin from him. Maybe it’s my imagination, but Toothless looks more like a teenager rather than adult in this painting, so it could be a scene of him just before meeting Hiccup.

By the way: Are there any places on our planet that don’t look extra-amazing in some way, when lit up by an Aurora? Probably not.

Hiccup and Toothless – by AllisonChinArt 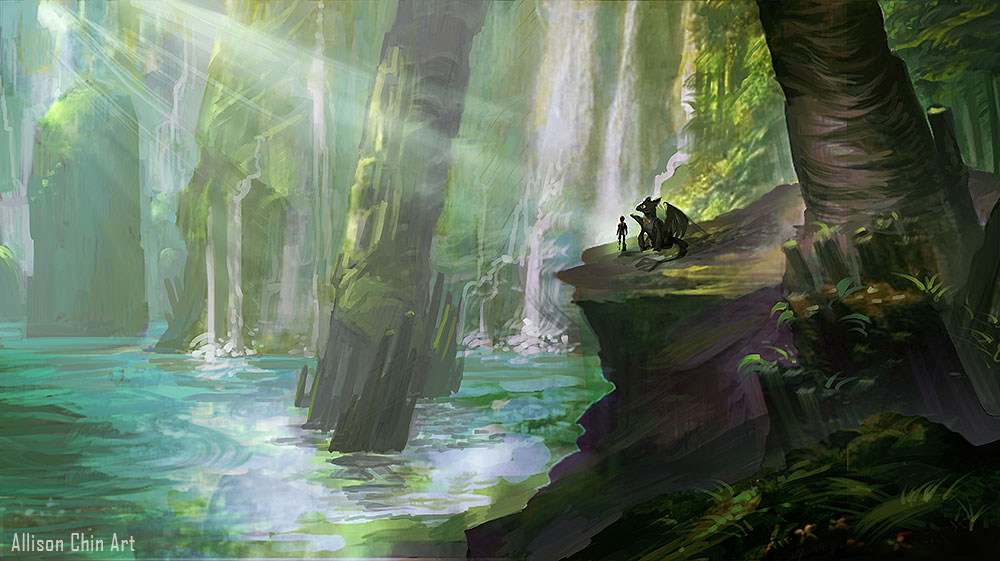 Speaking of light and amazing scenes… this place that Hiccup and Toothless have discovered is so well hidden that were it not for that single ray of light coming in, it would remain hidden in a murky and anonymous twilight.
Perhaps Hiccup was the first ever human to set foot there, thanks to his flying friend.

Places this far removed from the often senseless hustle and bustle of society, would certainly help one reflect on what is most important in life. 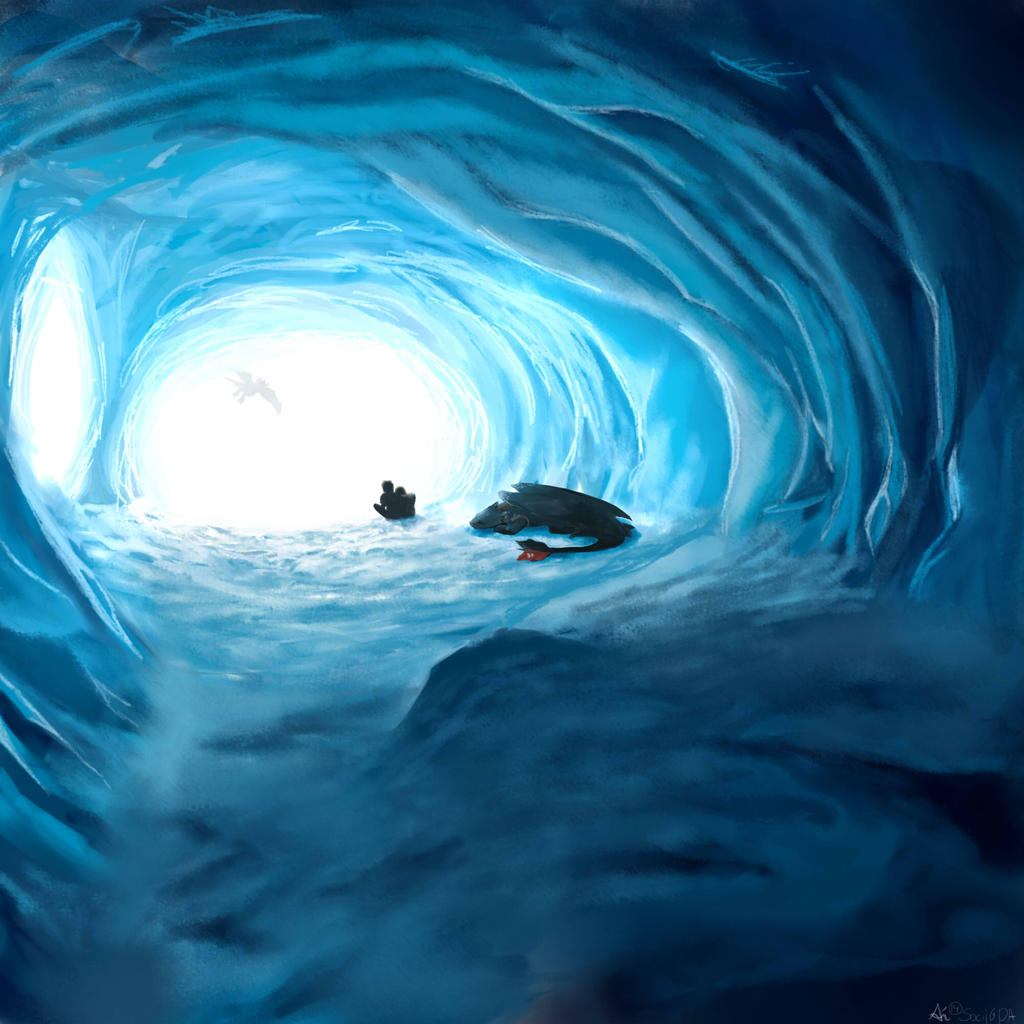 Astrid and Hiccup sitting closely together, inside an icy cave that may never have been possible to reach without flight. Toothless napping inside, as Stormfly enjoys flying outside the cave’s entrance.
This icy cave is a place that could very well make one feel terribly alone and vulnerable – however, when there’s a close friend nearby and also a safe way to leave again, it can become a special and peaceful experience.

Whom Who’ve Been – by Kenket

Yet another place that appears to be inaccessible without wings… or at least expensive professional abseiling equipment.

There was probably no other life inside that icy cave from the last painting; however this looks like a place where one might make some new dragon or at least crawly insect acquaintances.
I wonder where Toothless hatched from his egg – would it have been inside a cave? Perhaps Toothless is showing Hiccup his hatch-place.

Let the Wind Carry Us – by AuroraLion 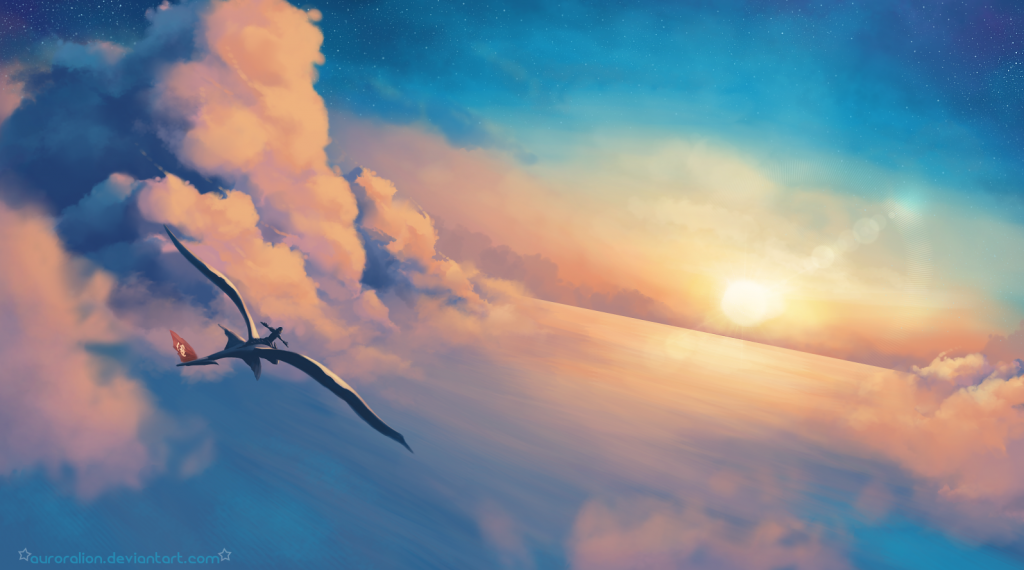 An opening in the clouds, revealing a perfect sunset above the calm sea. No wonder Hiccup has his arms apart like that, it’s certainly a memorable moment – I’d do the same!

Friendship To Last – by 3hil 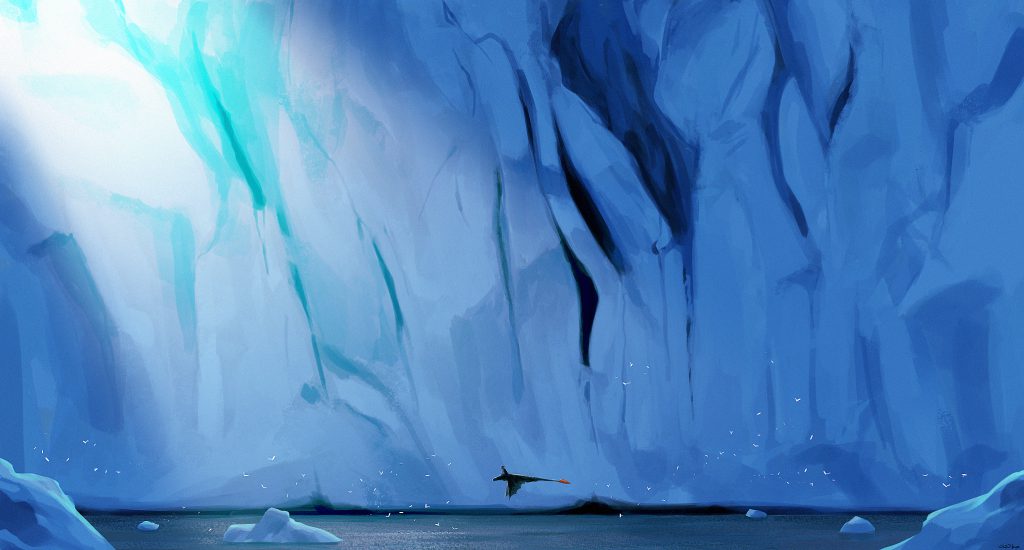 Is this “Glacier Island” from the fictional “Barbaric Archipelago”, or are Hiccup and Toothless flying past a giant iceberg? The story’s Barbaric Archipelago is set somewhere near Norway, and that region is certainly no stranger to icebergs. 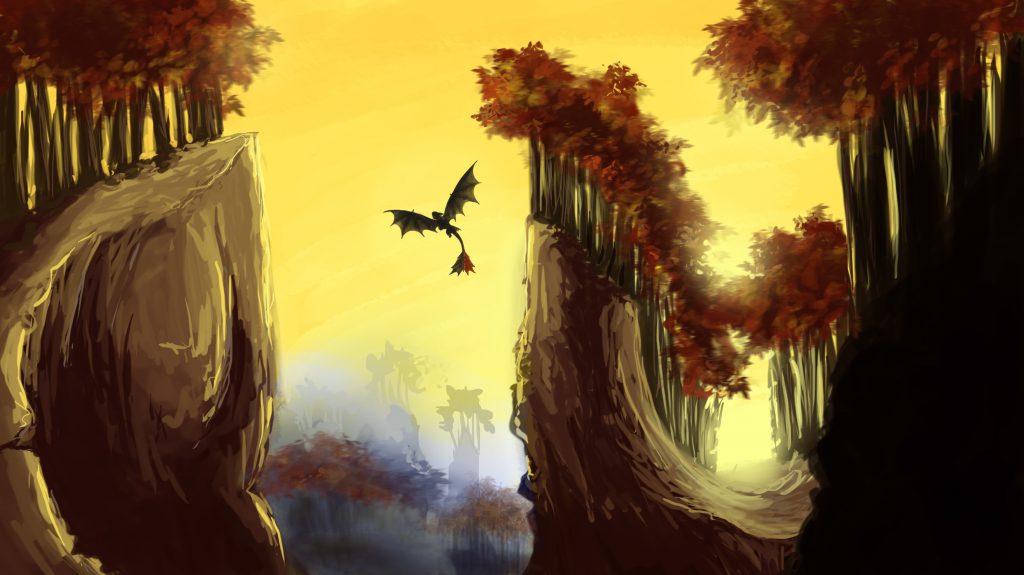 It would be pretty nice to visit a real place called “Itchy Armpit” I would imagine – they’d probably have a nice coffee shop and maybe a chemist to ask for advice on pesky skin conditions. What would their gift shop sell?
Back in high school, I remember a fellow classmate naming a fictional place “Donkey’s Armpit” for a game we were playing.  This was back in the 90’s – quite the trailblazer he was back then! It took DreamWorks until 2014 to come up with a place name, that has the word “armpit” in it. 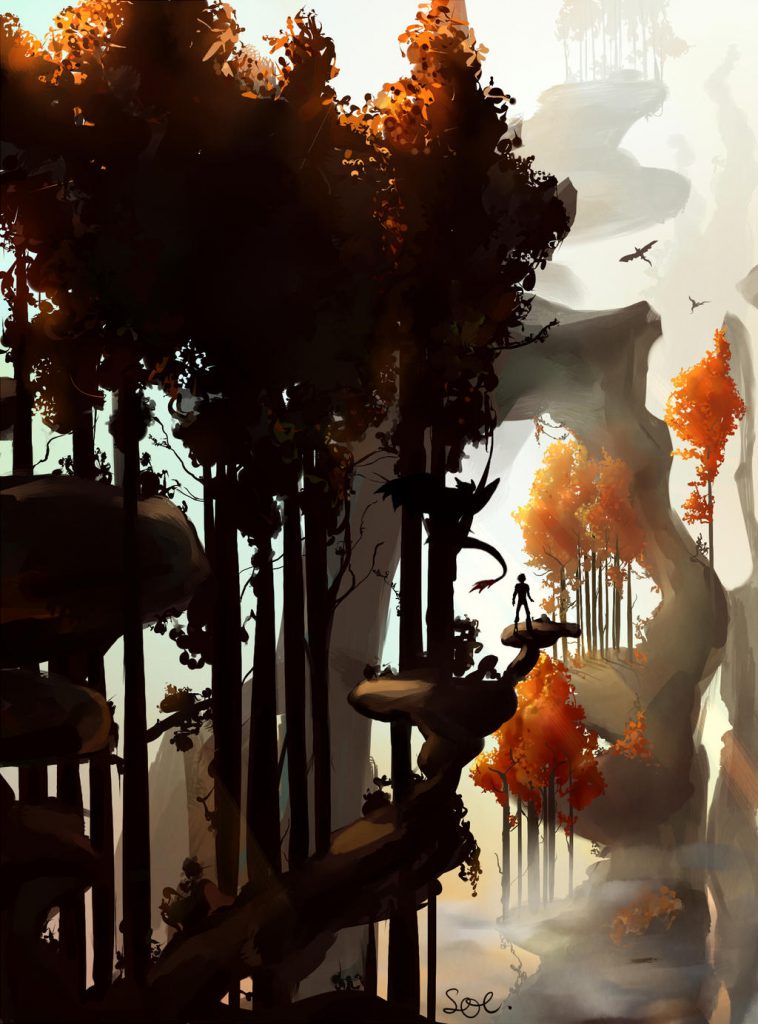 That’s quite a funky landscape right there, but I’m willing to bet that there’s at least one place on our planet which looks very much like it. Do you know of such a place?
Please let me know on my contact page, and I’ll update this blog post!

HTTYD2 – Beyond the Clouds – by Yakusokudayo 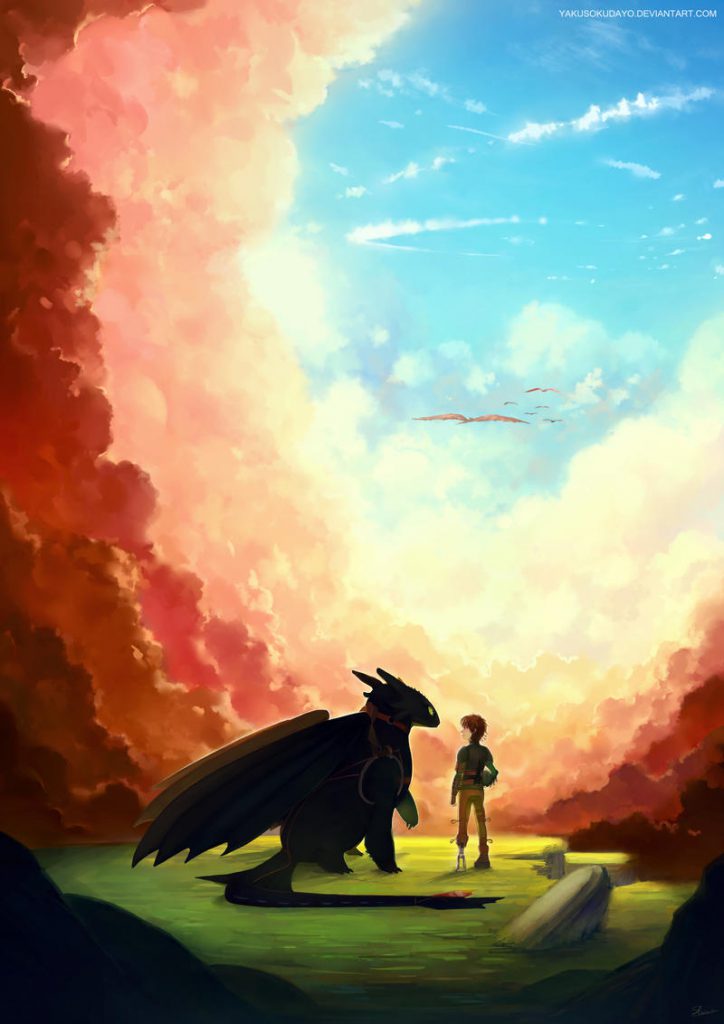 Wow, these two must be somewhere up pretty high to be surrounded by clouds like that. Ahh, the perks of having a dragon-friend strong enough to ride.
Back when I was a teenager, I went through a bit of a mountain biking phase and saw scenes similar to this one, except the clouds never formed a tunnel like that. Artistic license, or could such a phenomenon actually happen?

Toothless must be “pulling some serious G’s” going through the arch like that. In the foreseeable future, I’ll be taking some Nordic boat and train tours and will be seeing scenes just like this (minus the dragons) in person. Lucky you, if you’ve already experienced something like this! (Send me some holiday pictures!)
In Australia, it’s not uncommon to get temperatures up to and even over 50 degrees Celsius (122 degrees Fahrenheit). The last time this happened, the spiders on my house hung themselves from their thread and died, various birds fell dead from the trees, and my air conditioners overheated and shut down.
A cool Nordic holiday would be very agreeable, indeed. 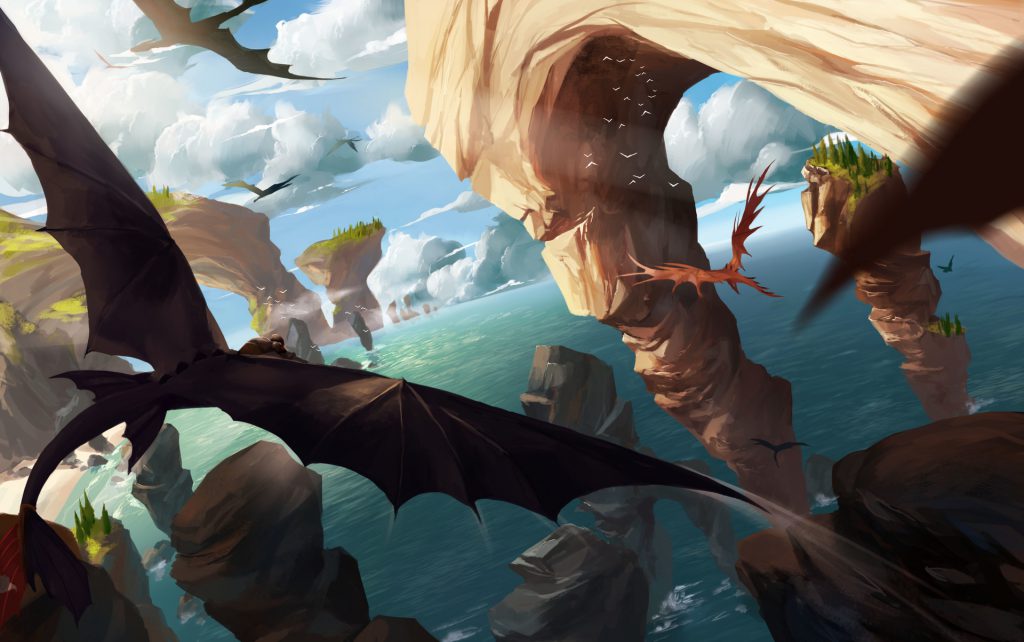 Those are some mighty impressive sea stacks – what a great scene. One of my all-time favourite fanart paintings, and one of the few that inspired me to create this HTTYD fansite, and go on to look for more great fanart.
I like this fanart painting so much, that it became the background wallpaper for this fansite – thank you 77chen for making it! 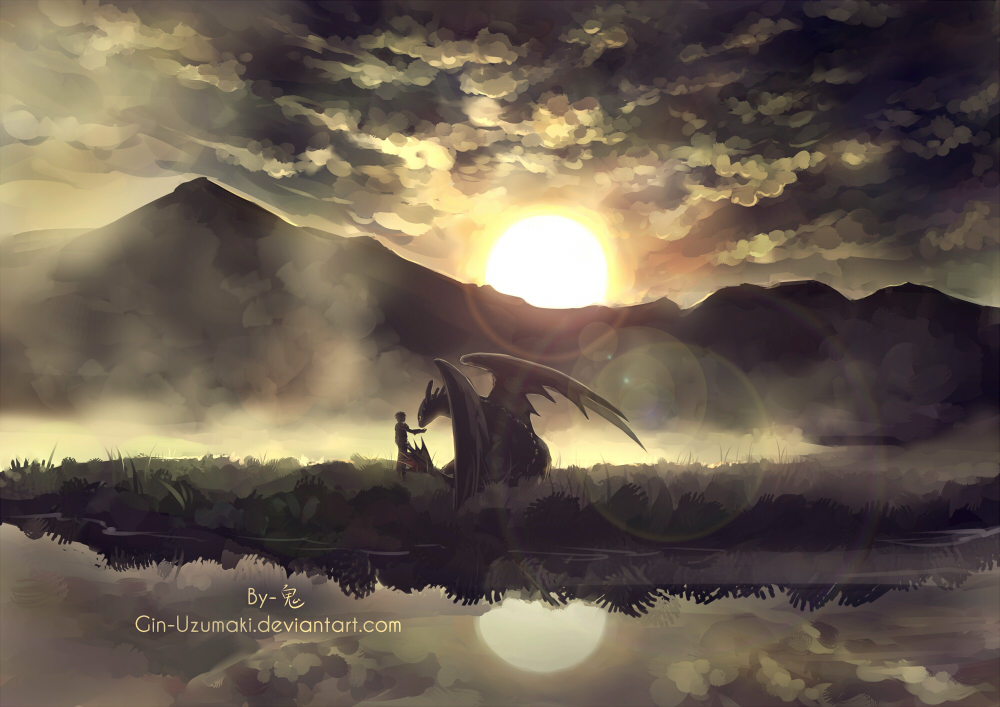 As yet another fanart post comes to an end, the day begins in this fanart painting. Who knows what discoveries lie ahead, in this brand new day.

In my next favourite-fanart post, I’ll be showing my favourite Hiccstrid (Hiccup and Astrid) fanarts, with any dragons taking backstage for once.

Do you have suggestions, would like to recommend some art or submit your own? Then feel free to get in touch or just leave comments, below: