Fanart of Toothless, from the movies and TV series! Well, Toothless is my favourite dragon. He’s more than just a super-powerful, fast and rare dragon to look at from afar, but also a dragon who’s willing to reach out and open himself up to those with truly good intentions, rather than just isolate himself completely.
No wonder he’s so popular.

The original book series version of Toothless is a “little” different – being small as a rabbit, green and very naughty, but he too grew on me as I went through the books.
In the book series, Hiccup rides a “Windwalker”, who is a very fast and agile dragon. Hiccup was teased by his peers for choosing the Windwalker as his riding dragon, as they’re supposedly common and “an ugly duckling” when younger.

Being chosen by Hiccup saved the Windwalker’s life – the dragon was injured, scruffy, afraid and generally considered to be pretty much useless and so would have been put down (with a mallet smacked on the head).
Personally, I thought the Windwalker was adorable. He was also very brave and loyal – as terrified as he often was, he never let Hiccup down, putting his own life in great danger to protect and save Hiccup more than once. Even little green Toothless overcame his fear to stand by Hiccup, during times of almost certain doom.
Friends like that in real life, are rare indeed.

In the future, I’ll have more information on the book series version of Hiccup, “Garden Dragon” Toothless and the Windwalker. For today, let’s look at the “Night Fury” Toothless from the movie franchise: A highly (possibly the most) intelligent dragon and the last of his kind, loyal to Hiccup and good friend to the Dragon Riders.

Click on a picture to see it pop up in a “lightbox”. Pictures are posted in no particular order.
(Featured image: Toothless – by Illustriation)

A very friendly and welcoming drawing of Toothless. He’s missing his tail fin, so this was after he had befriended Hiccup. However, even though he can’t fly on his own anymore, he is clearly a relaxed and cheerful dragon.

Perhaps this drawing shows the moment when Toothless was basking on some rocks, looking out to sea, and then spotted Hiccup happily walking over to him after being at Viking-school.

Power and Beauty – by Red-IzaK 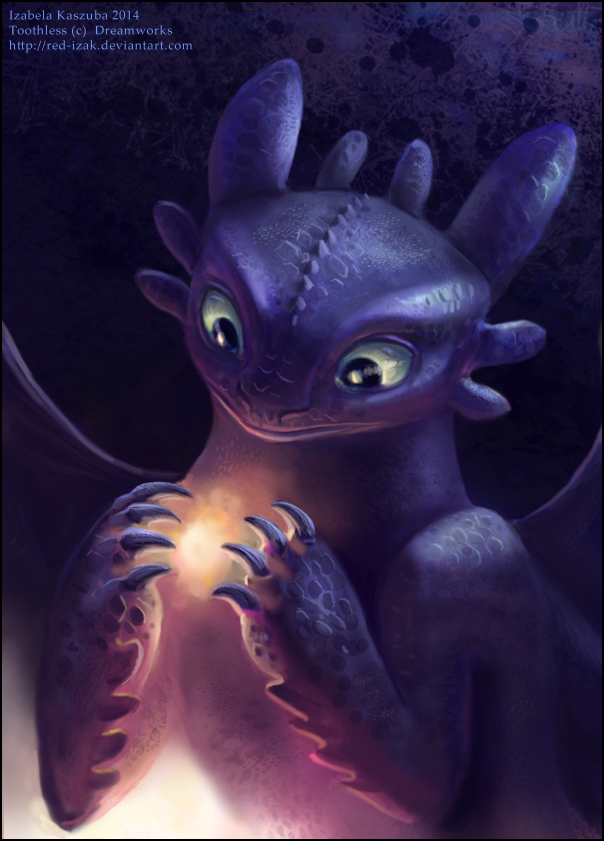 A young Toothless, still learning just how powerful his fiery breath is. I like the lights in his eyes, and the way the scene is lit. 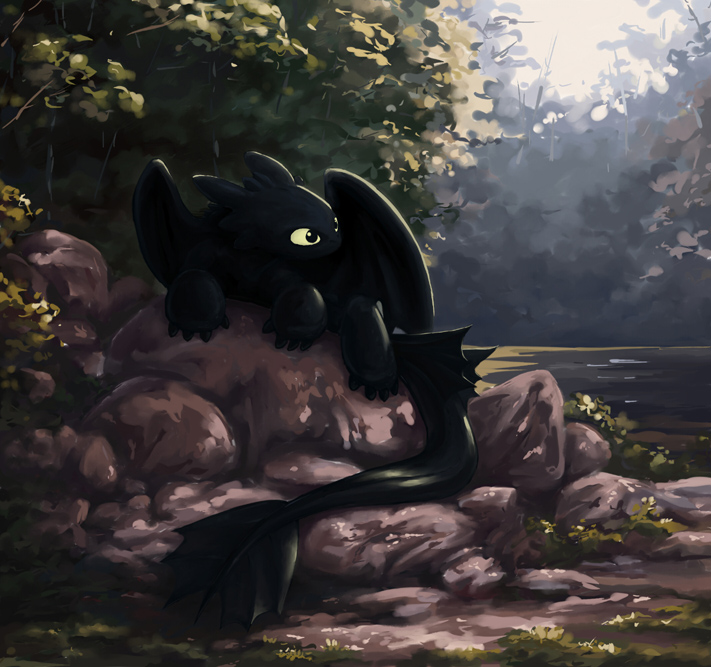 Another nicely lit and also peaceful scene, with a young Toothless basking in the sun, next to a river. 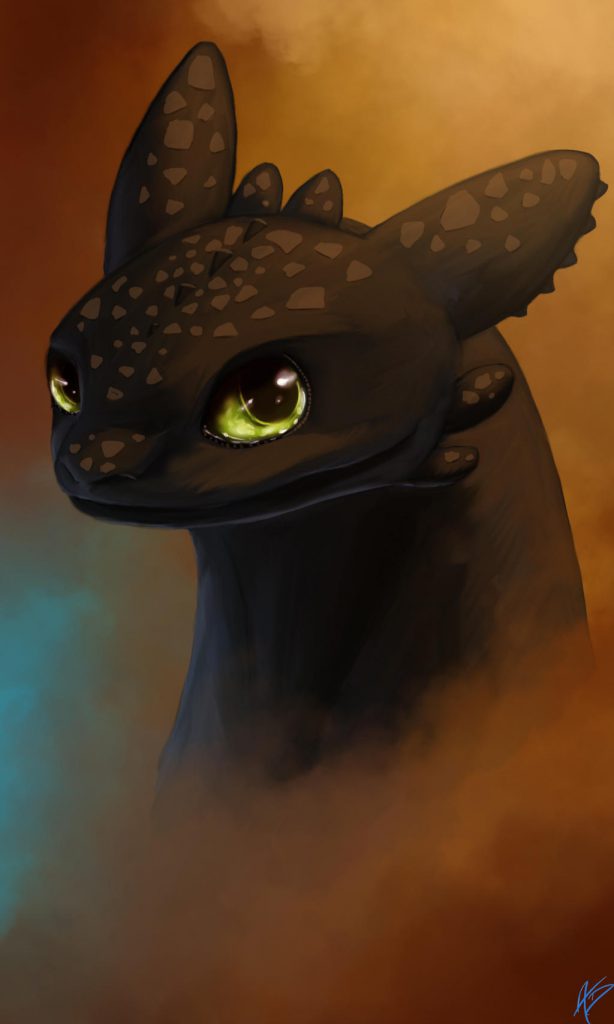 I wonder if Hiccup would have had a portrait of Toothless hanging on his wall. 😛 His eyes look alive in this painting. 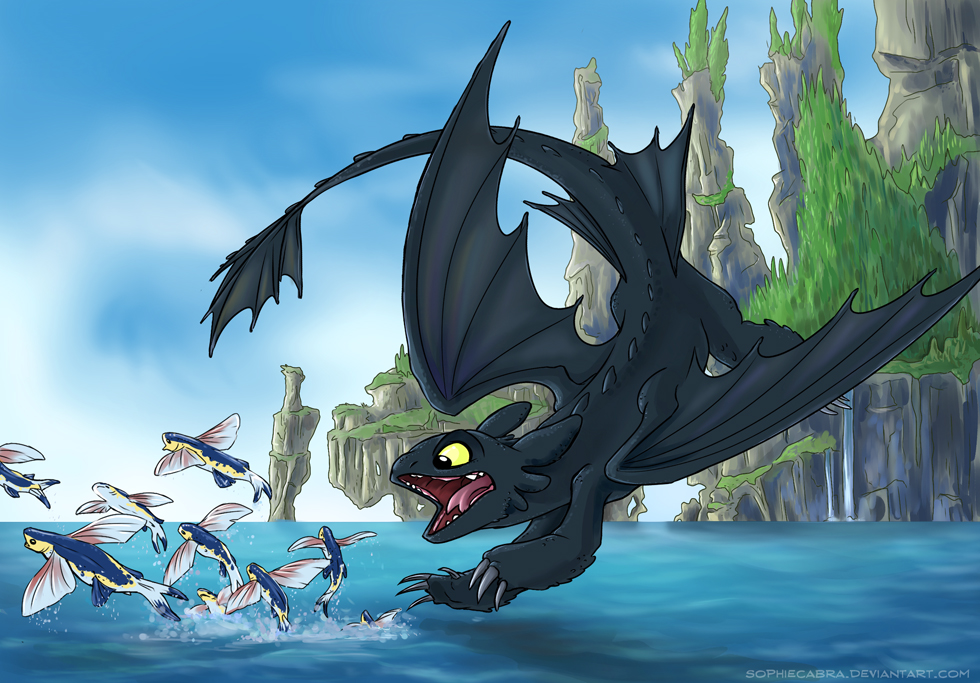 Good ol’ playful Toothless going after some flying fish. Toothless is at a disadvantage here though – he’s not wearing his automatic tail fin that Hiccup made him, and flying fish can glide over water for 200m or more. He’s still having fun though! 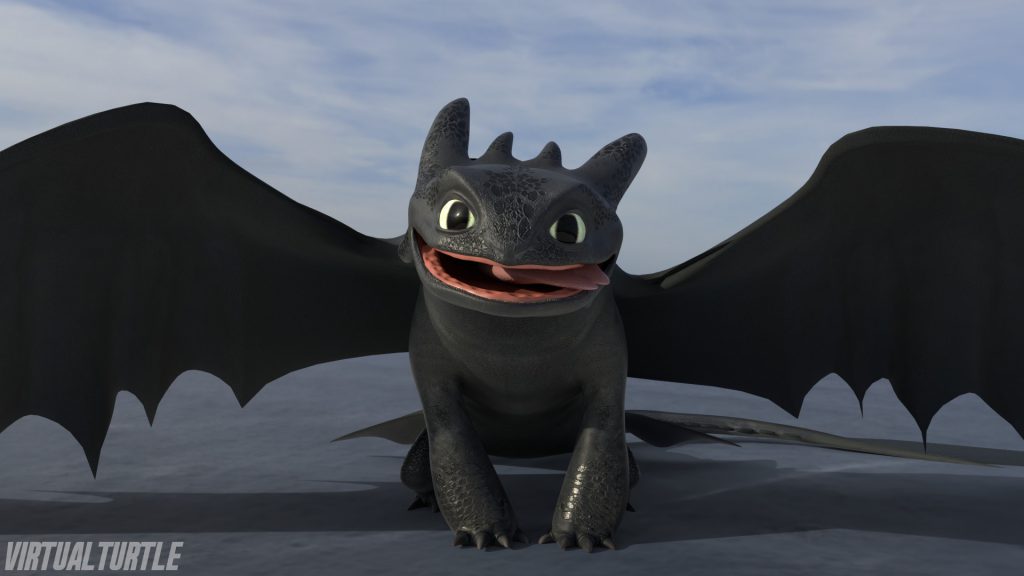 Fans aren’t only drawing or painting Toothless, but they’re also modelling him in 3D – just like in the movies! So far, this 3D model has in my opinion the friendliest smile, so he’s my favourite.
I’ll keep my eye out for more smiling 3D Toothless pictures. 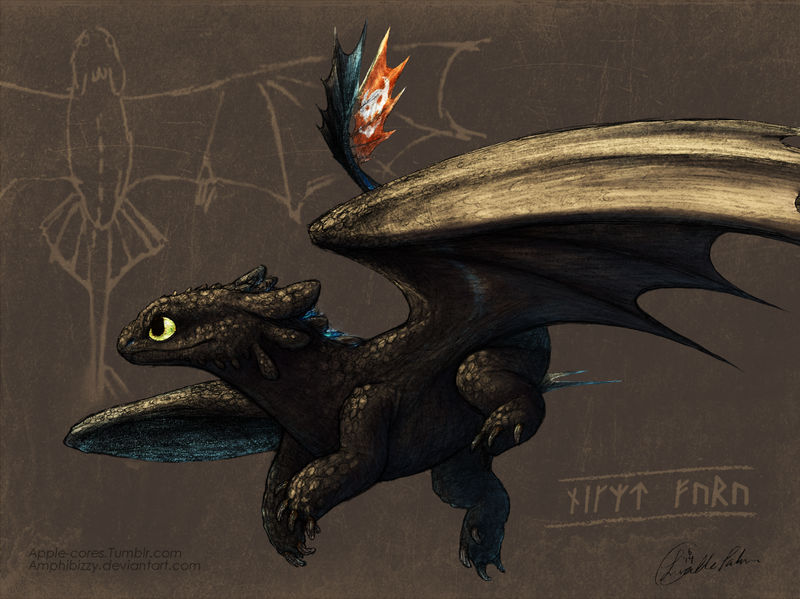 It looks like Hiccup later added a second, more detailed drawing of Toothless: over the old quick sketch that he made while observing Toothless, trapped in the cove at the time (in the first movie). 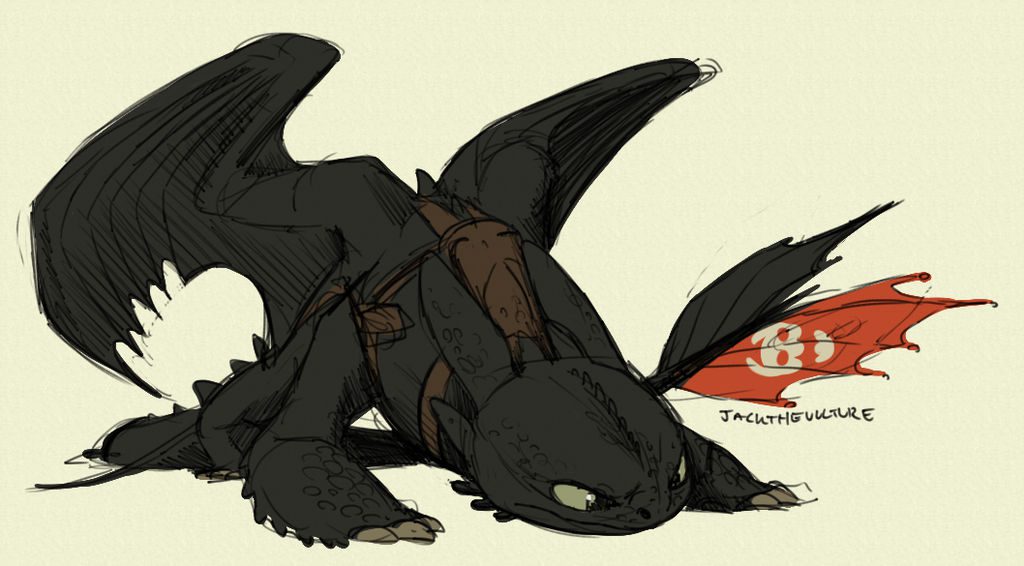 This is not a detailed drawing, but it doesn’t need to be – I like the pose, it’s very dynamic and fits the situation. 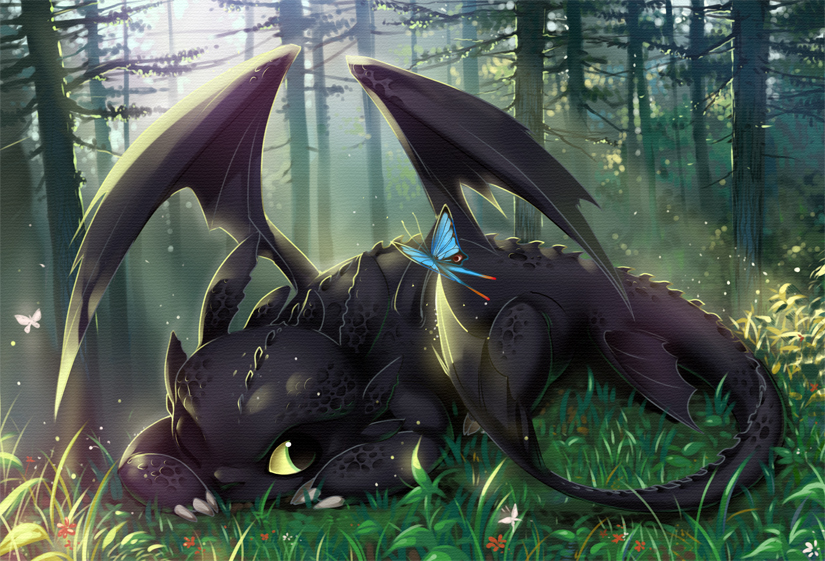 The beautiful scenery and lighting makes this picture one of my favourites as well. A very peaceful moment. 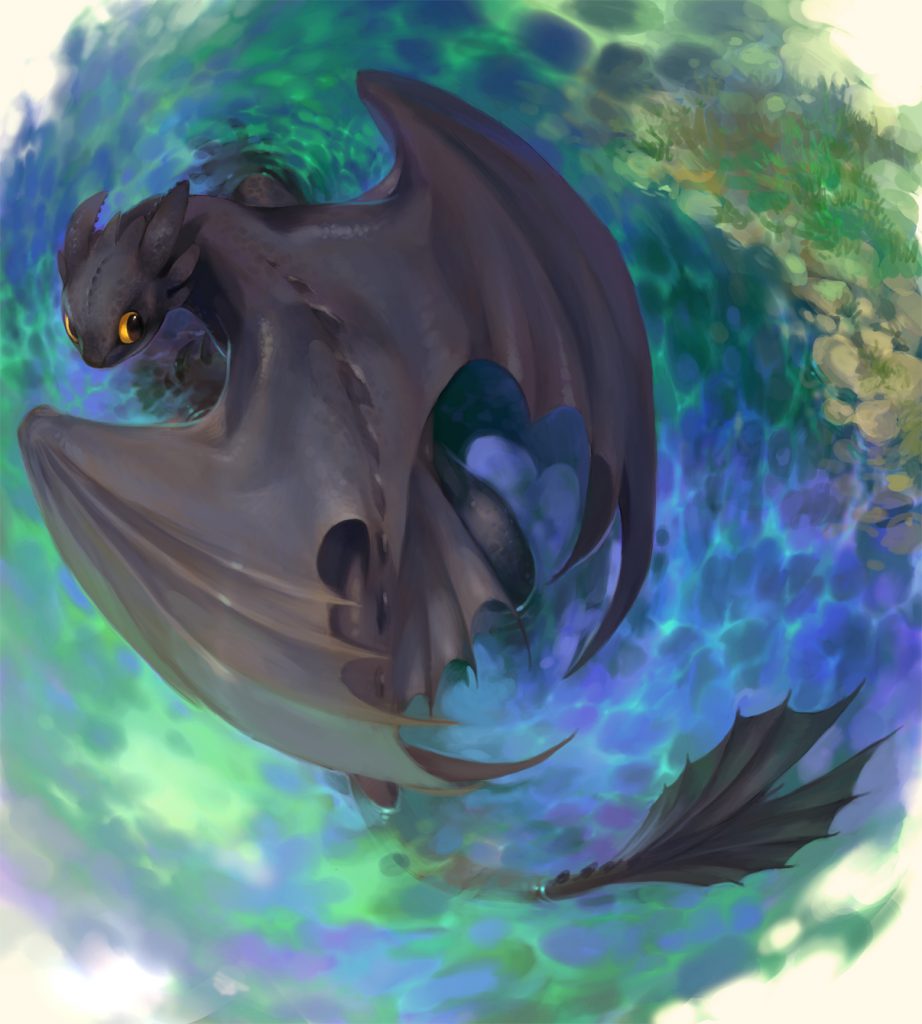 It’s not often one comes across HTTYD fanart from this angle – looking down from above. A unique painting that’s also skilfully made, with a younger Toothless, before he met Hiccup. 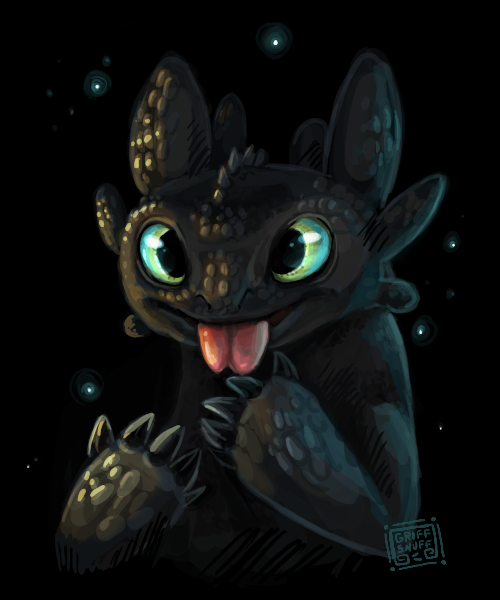 I like the lighting and the living eyes, and the sense that it was made by someone who is clearly fond of the character (like with pretty much every piece of fanart here). 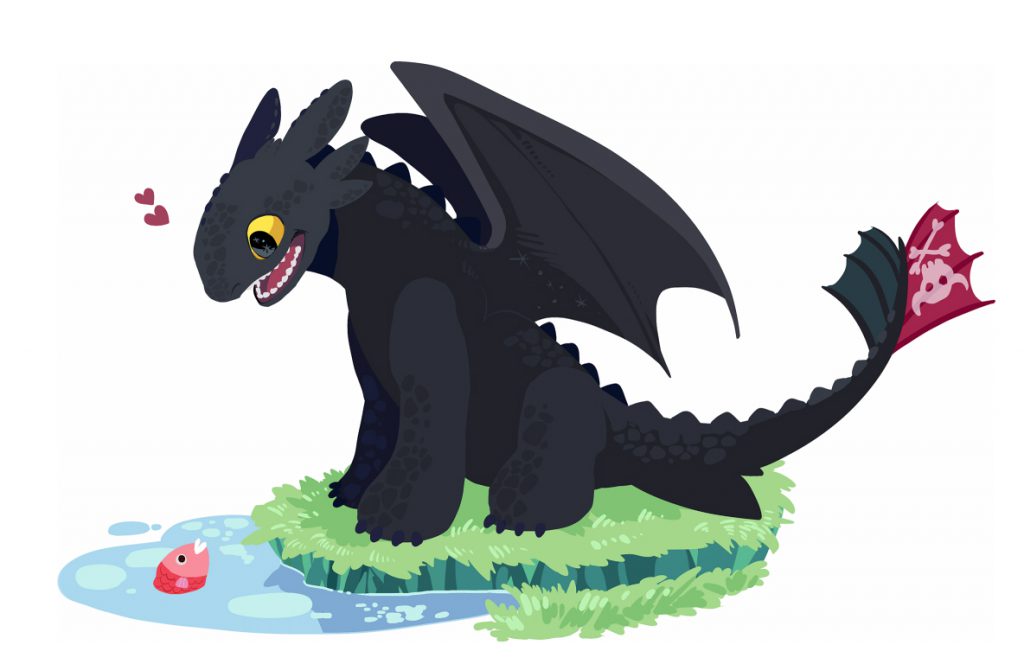 Looks like it came straight out of a good quality children’s book! To me, those love-hearts are the “icing on the cake” – Toothless normally eats fish, but could these two become best friends? The fish isn’t trying to escape. Toothless even has stars in his eyes, haha.

The artist is Japanese, so maybe this is a Koi fish. In Japan, Koi fish symbolise good fortune or luck, as well as perseverance in adversity and strength of purpose. Certainly sounds like something the Dragon Riders and dragons have, and would also like more of.
Maybe Toothless is happy about meeting a positive symbol of good fortune, and it not swimming away from him in fear. 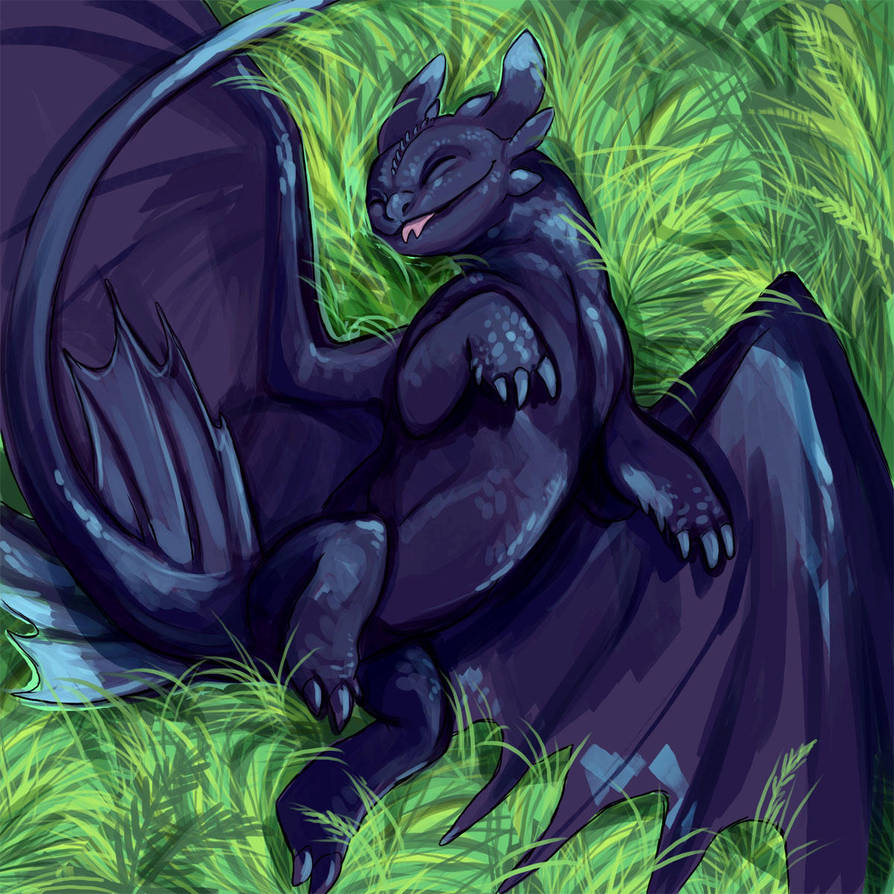 Aww, he loves rolling around in Dragon Nip so much. How adorable!

My doggie Jessie knows the feeling too! Not so much rolling in Dragon Nip, but instead rolling in wet grass on a beautiful sunny morning!

There is no other dog I know, who loves wet grass and ear and neck scratchies as much as Jessie.

Toothless and Jessie – two peas in a pod! 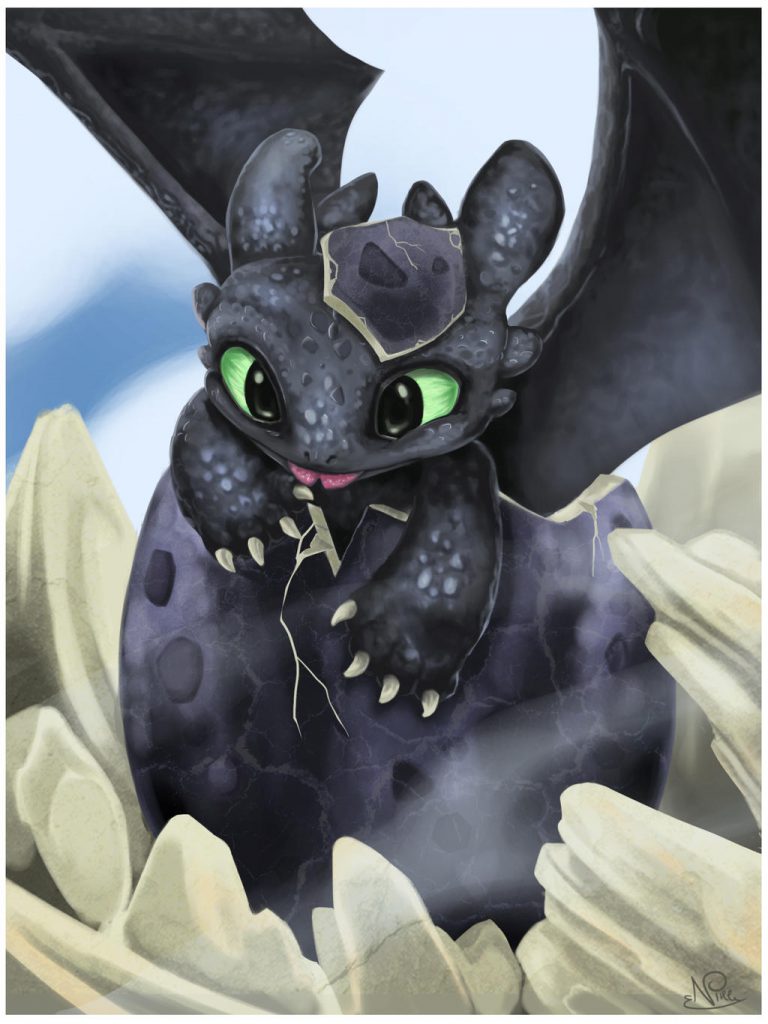 Toothless blissfully rolling in Dragon Nip is adorable, but still not as adorable as a brand new baby Toothless, just hatched from his egg!
I’d adopt him right away. And wow, that’s a thick shell!

In my next favorite batch of fanart, I’ll post HTTYD fanart made in a unique style you may not expect. If you have suggestions, would like to recommend some art or submit your own, feel free to get in touch or just leave comments on this post, below: