The “How to Train Your Dragon” Video Games

What fan of How to Train Your Dragon wouldn't want to interact with or even ride one of the dragons? Especially the Night Fury Toothless from the movie franchise. Well, the closest you'll probably ever get is to play a console/PC video game or “Massively multiplayer online role-playing game” (MMORPG) over the Internet.

Note that the “free to play” games available, like most others of their kind, require either lots of time spent playing to earn rewards, or “upgrade” purchases with real money.
Lots of kids these days are getting addicted to video games, and especially MMORPGs and “free to play” games. Many are spending all their pocket money (or parent's money) on upgrades, missing out on school, becoming physically ill and so forth. However, in moderation (just like most things), video/online games can be quite fun. Keep an eye out for invasive privacy policies with online games.
The paid PC/console games can be played without further payments/microtransactions, which is good.

The following games can still be played, but (mostly) defunct games are not listed:

By Outright Games Ltd., this game doesn't let the player play as Hiccup or Toothless, but instead focuses on a new Rider/Dragon duo - Scribbler and Patch, the “Chimeragon” dragon. The duo's task is to defeat the villians who've destroyed a dragon sanctuary created by Hiccup and the Dragon Riders.

Graphics-wise, the game has a chibi-style rather than aiming for realism. It's mostly a dungeon crawler adventure game without much flying. The story of the game attempts to explain and tie in some events between the second and third movies, the “School of Dragons” MMORPG, TV series and even graphic novels.
Some reviews have mentioned that while these tie-ins were noticed, they didn't really contribute to the overall Dragons story in a serious way.
Generally seems to be regarded as a fun little game, that won't take long to complete.

A reasonably standard match-3 puzzle game by Ludia. You can collect and level-up dragons, and crossbreed them - for example a Deadly Nadder with a Stormcutter (not that such a thing would work if they were real).
Criticised as overly commercial and having “slot-machine” elements to it, but also praised for its quality graphics, good bug-free performance and fun factor by a number of reviews. Apparently, the game becomes increasingly difficult to complete without spending real money.

A “village-building” game by Ludia, once again praised for its quality graphics and artistry, but appears to share much of the criticism regarding “Titan Uprising”.
It's apparent that a lot of work went into creating this game, and although having been launched in 2014, it continues to be upgraded with new features and content.
According to long-time players' reviews, actual money is required to make solid progress further into the game. (This is common with so-called “free-to-play” games.)

How to Train Your Dragon

Mostly a tournament fighting game pitting dragon against dragon along with a few somewhat related mini-games, which doesn't make much sense as Hiccup would never pit dragons against each other. There's no meaningful attempt to follow the Dragons story either.
The game didn't receive especially good reviews, however can be bought cheaply second-hand nowadays. How much is interacting with one of the movie's dragons worth to you? You can play as Hiccup or Astrid and fly with their dragons - that alone sounds pretty good!

How to Train Your Dragon 2

Much in the same vein as the previous game, however has made some attempts to improve on its predecessor's flaws. Still received a number of poor reviews, and essentially remains a collection of mini-games.
Still... you get to fly Toothless as Hiccup! Maybe it takes an actual fan to overlook the game's weaknesses.

A go kart racing game with DreamWorks Animation characters, where Toothless actually sits in one of the karts! 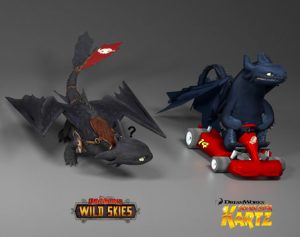 Where else can you ride a go kart as Toothless? You can also ride as Hiccup, if you want.
Once again, the reviews weren't especially good for this game and apparently it does have some annoying bugs here and there, but people did manage to enjoy it for what it is.

The MMORPG game, which can be played over a computer's web browser with the Unity plugin or on tablets and smartphones.
Has been around since 2013 and can be free to play, however will require actual money to be able to fly Toothless and get other “upgrades” - it's a very commercial game, like a lot of its kind.
For a number of years, the game seems to have been affected by unusual bugs that disrupt gameplay, and a lot of people have been complaining bitterly on forums and review websites.

A good portion of this game's reviews are quite disturbing and paint a picture of increasing commercialism and sales-tactics within the game - when the game first was released, these elements apparently weren't as obvious. Some reviewers have complained of not receiving their purchases after paying with credit card, or losing their purchases afterwards, with apparently no support or resolution. You'll need to agree to a number of lengthy terms and conditions when registering, so consider those things before jumping right in.

However it's certainly popular, had a lot of work put into it and continues to receive regular content updates.

You can find games related to the original book series by Cressida Cowell as well. These are little interactive games on the HiccupTheViking.com website. You'll need the Adobe Flash plugin installed on your web browser.
These little games aren't like the ones from the movie franchise, that have had tens and hundreds of thousands of dollars spent on them.

For greater insight into the How to Train Your Dragon video games, as well as now defunct ones, you can visit the HTTYD wiki pages that go into fine detail:

https://howtotrainyourdragon.fandom.com/wiki/Category:Video_Games
See the HTTYD wiki here, you will go directly to the video games category.

Hiii! We're still working on expanding this page a bit. If you'd like to contribute to this page, please contact us here.
Specifically, we're interested in:

All game images used on this page, were found on the HTTYD wiki: https://howtotrainyourdragon.fandom.com/wiki/Category:Video_Games
Header image is a montage of photos of the covers or promotional screens of the DreamWorks HTTYD video games.

Additional sources, and how we choose and link sources: Website Art, Graphics & Other Sources, Plus Posting & Linking Policies

Consider Basic Internet Browsing & Safety Tips, when visiting these and other websites. No links to other websites are affiliate links: advice is 100% free & independent.