Click on a picture to see it pop up in a “lightbox”. Pictures posted in no particular order. (Featured art: Hiccup and Toothless – by DanielGovar)

Hiccup sure knows how to travel in style!
If Toothless were “real”, then I’d imagine he’d probably still need to be bigger, to carry people on his back. What’s special about this drawing I feel, is that Toothless looks to be a lot more plausible and reptilian, without appearing threatening, unpredictable and dangerous.

Toothless also doesn’t appear to have seemingly unnecessary and ornate lumps, bumps and spikes on his body (like a lot of other supposedly “realistic” dragons) that would only slow down any creature capable of efficient flight.

Impressive and mighty? Yes. Unnecessarily ornate and dangerous? No.

This is a speedpaint? It looks like a lot of time went into it. Speaking of speed… Toothless in this painting, looks like a dragon capable of even greater speed, than in the movies.

Flight of the Night Fury – by Rajewel 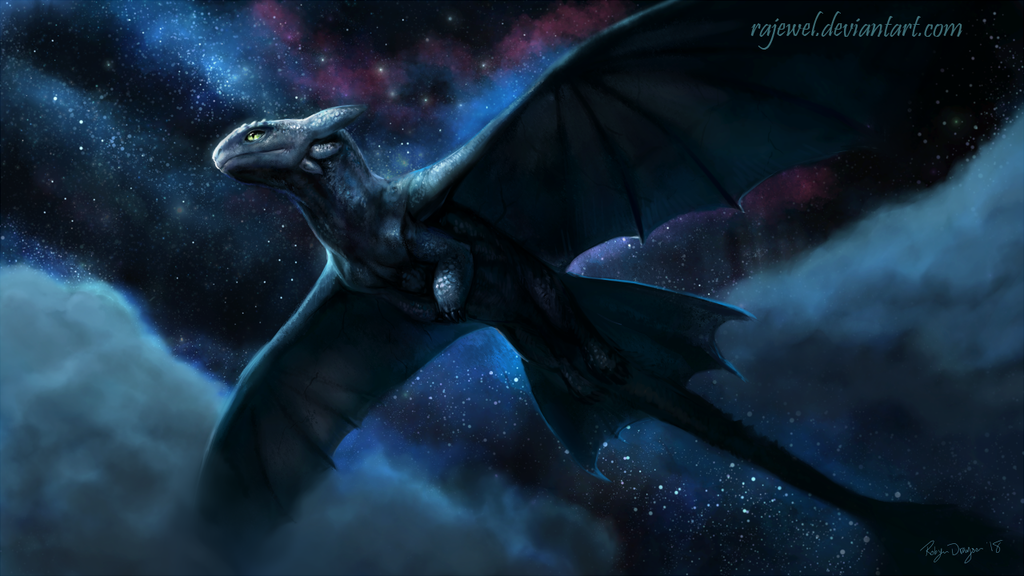 I don’t know about you, but personally I think it would be pretty nice to look up and witness a Night Fury dragon flying in the sky.
(Although, I’d watch out for any poop raining down – had a bad experience once with a beautiful flock of Sulphur-crested Cockatoos.) 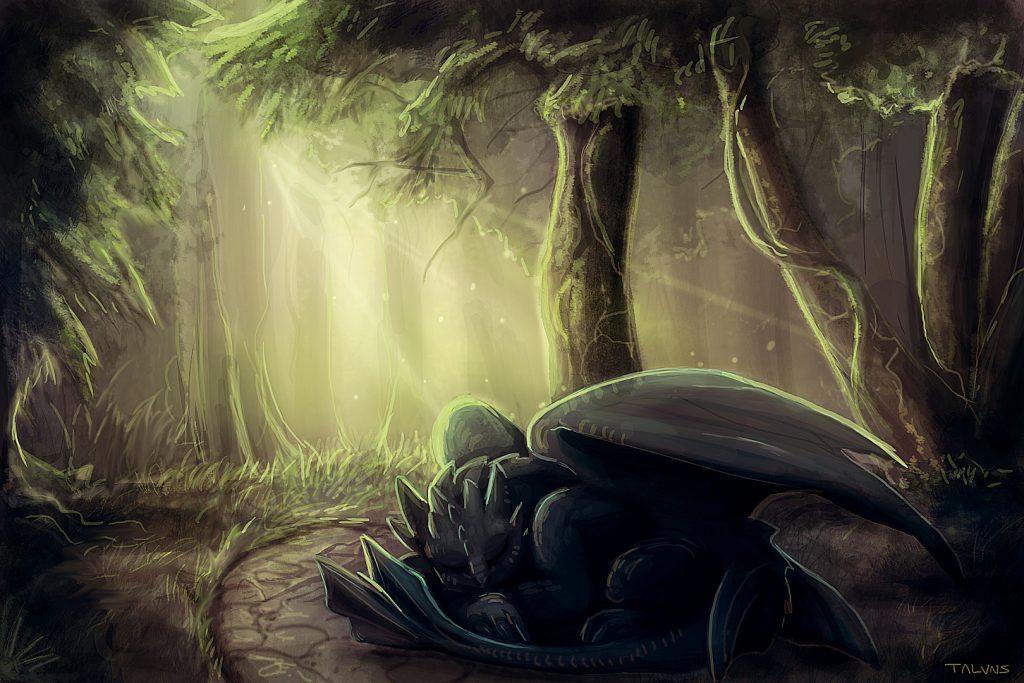 The sunlight is very nice in this digital painting, I think. How it seems to touch in varying amounts, every part of what would otherwise be a very dark and cold forest.
I don’t dislike the night, but cold, dark and misty forests certainly aren’t my cup of tea – better to just look at them in a painting or photograph.
Toothless is a little bit undefined, being the main subject he should have received the most detail, but I still like the scene.

The Dragon Masters of Berk – by EightBreeze 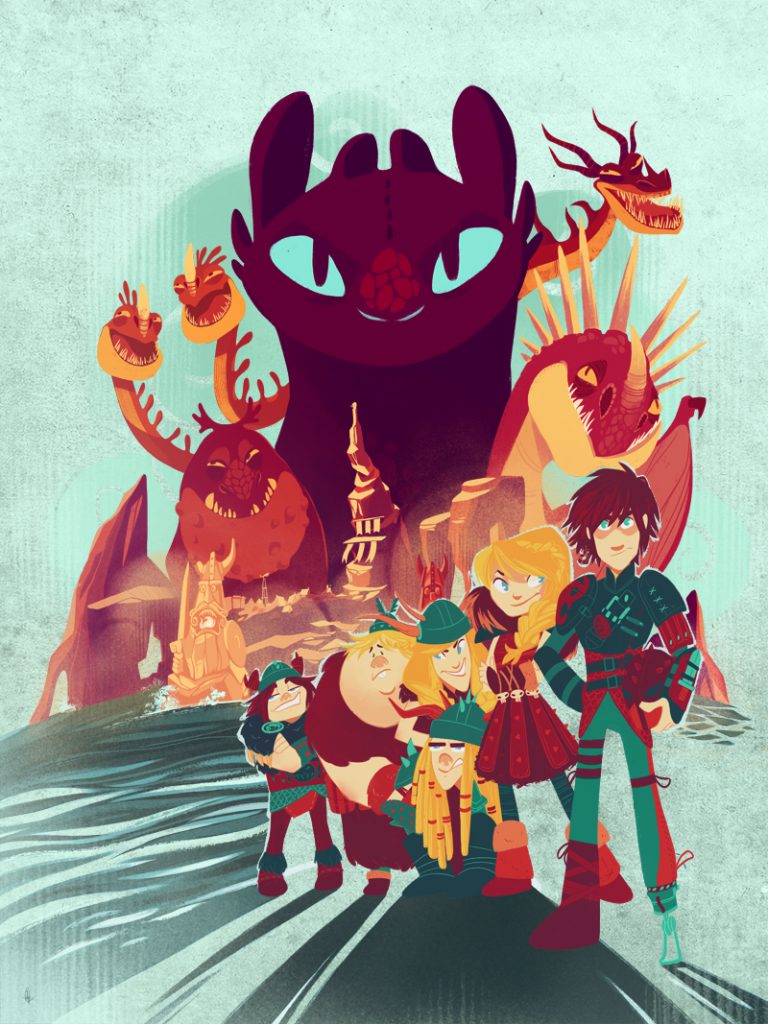 One of the boldest Dragon fanart drawings I’ve seen – a loud and brash statement, that in my opinion could easily have been used as an official advertisement/poster of sorts, for a younger audience.
“This is Berk, and These are Our Dragons!” 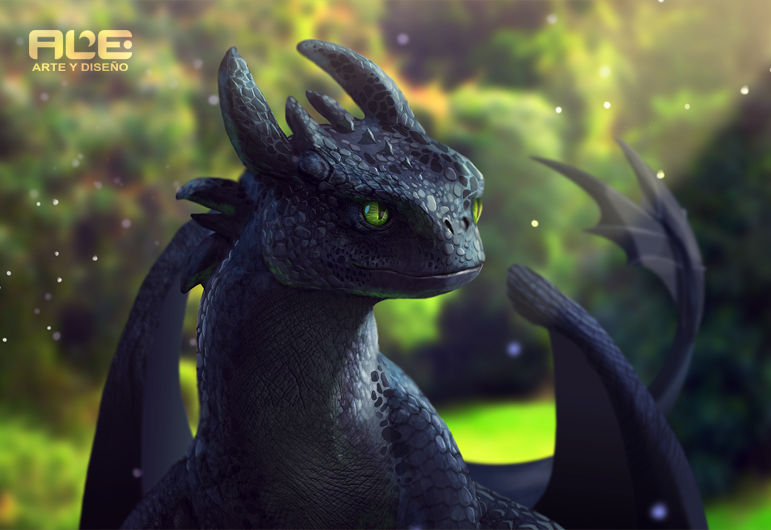 I like that while Toothless no longer looks as “cute” as in the movies, he doesn’t look mean or bad either. He still looks intelligent, and like a creature one could still approach – carefully.
Some scales look a bit out of place, but the light on his face plays an important part in making him look more realistic.

The Night Fury – by Drakonessa-Tsi 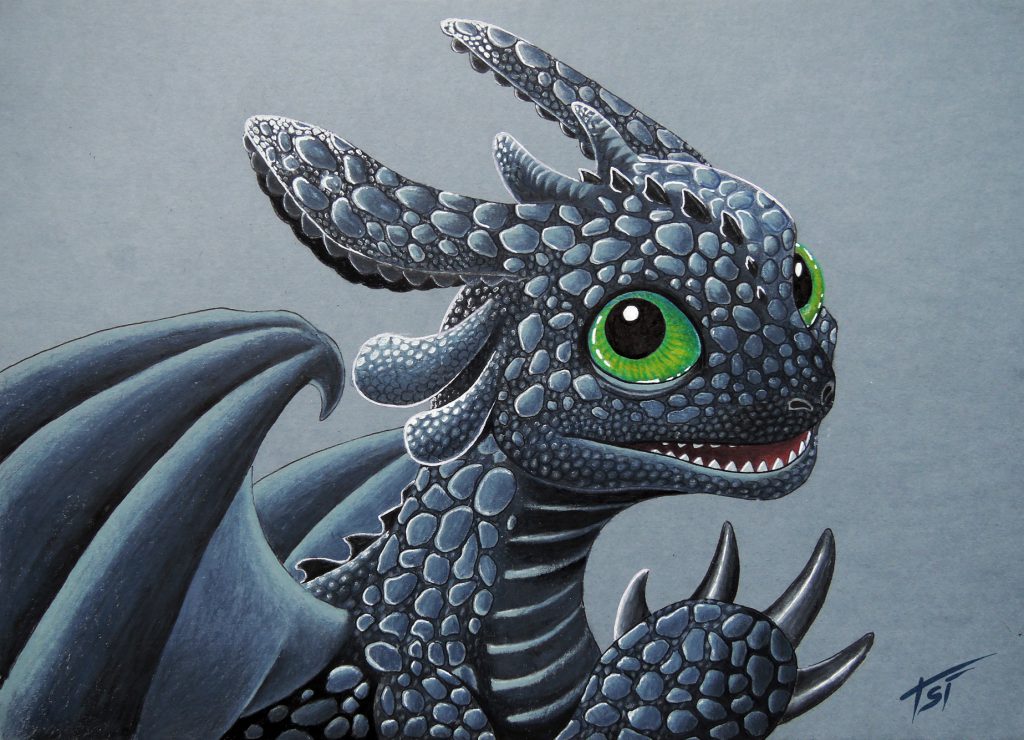 Hard to explain, but it almost seems like that if HTTYD weren’t just a fairytale, then this drawing could have been made a long time ago, by someone who was very fond of a young Night Fury.
It looks like a kind of dedication, statement and reminder of a master’s fondness to his/her dragon, from long ago – somehow it seems personal, like a family photograph.

Toothless and Hiccup – by Vshen 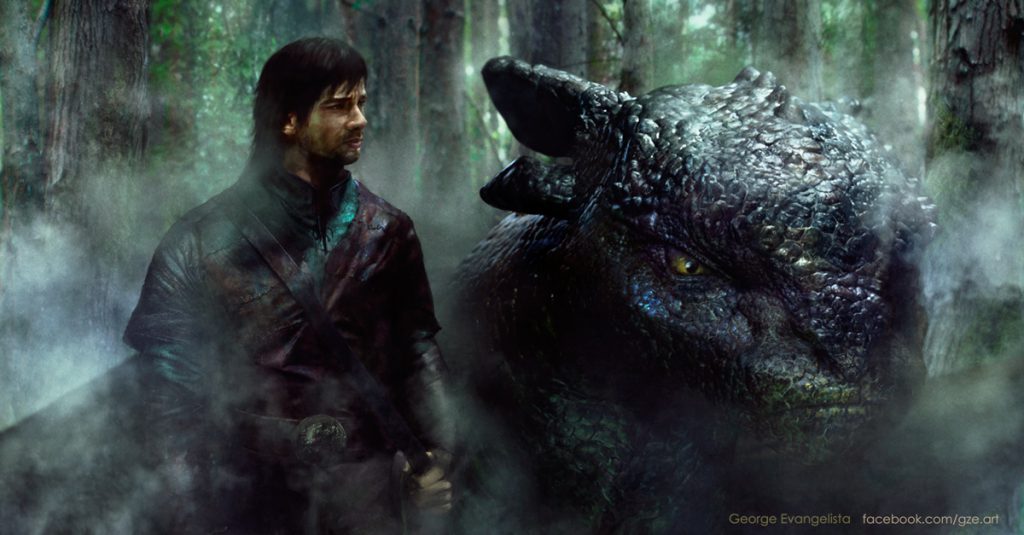 How to Train Your Dragon – the live action movie? I’d watch this movie without delay, and line up to get autographs from everyone!
Maybe there’s just a little bit too much fog in this picture, covering things up, but it certainly stands out nonetheless. 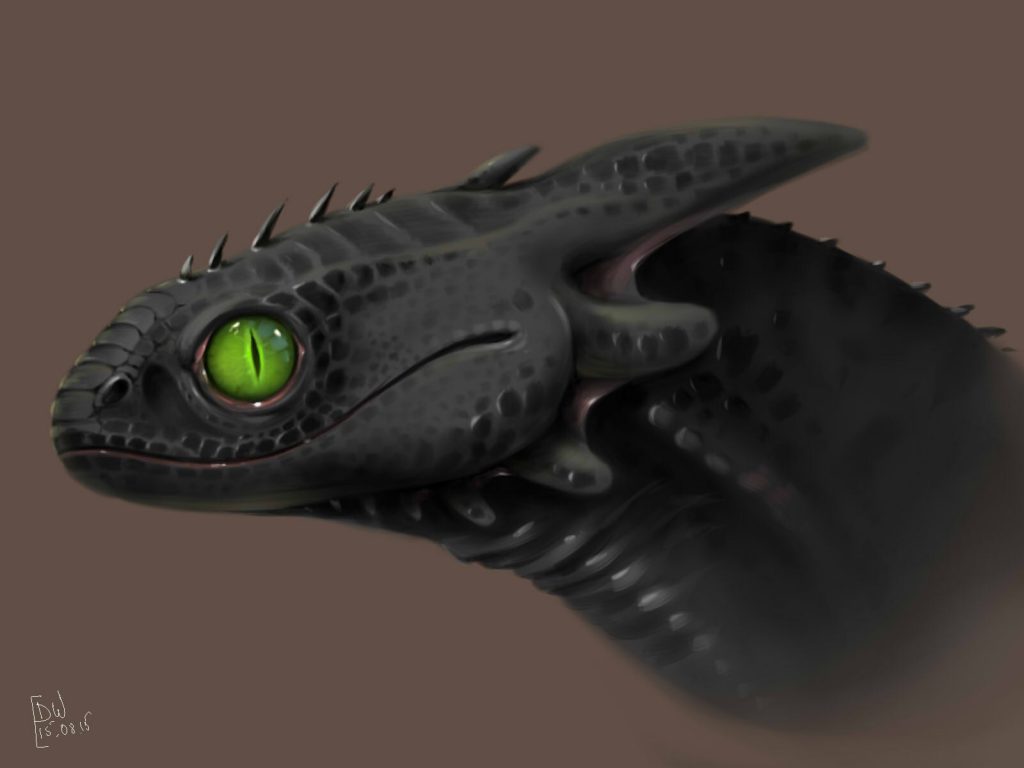 Well… I’d have to make doubly-sure he’s friendly, before reaching out to touch his face. Maybe feed two fish, instead of just the one, to butter him up just that extra little bit… Okay, three fish. 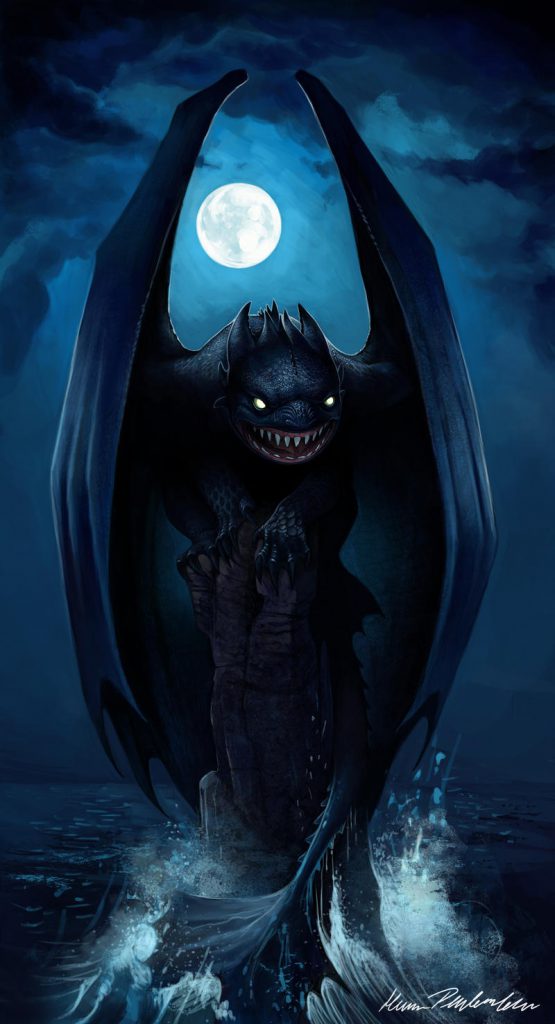 Clearly very skillfully painted. Reminds me a bit of what DreamWorks did in the third and final “HTTYD: The Hidden World” movie:

The “evil” character “Grimmel the Grisly” was made into the opposite of who Hiccup was, by the movie’s makers.
In the first movie, when Hiccup was a young boy, he freed the trapped Night Fury dragon Toothless instead of killing him. This set Hiccup on the path of being “good”.

In the “Hidden World” movie, when Grimmel was a boy, he killed the first Night Fury dragon that he had come across. This set Grimmel on the path of being “evil”.

If Toothless had killed Hiccup when he had the chance, then applying the same logic, Toothless would have likely turned out like the dragon in this painting. 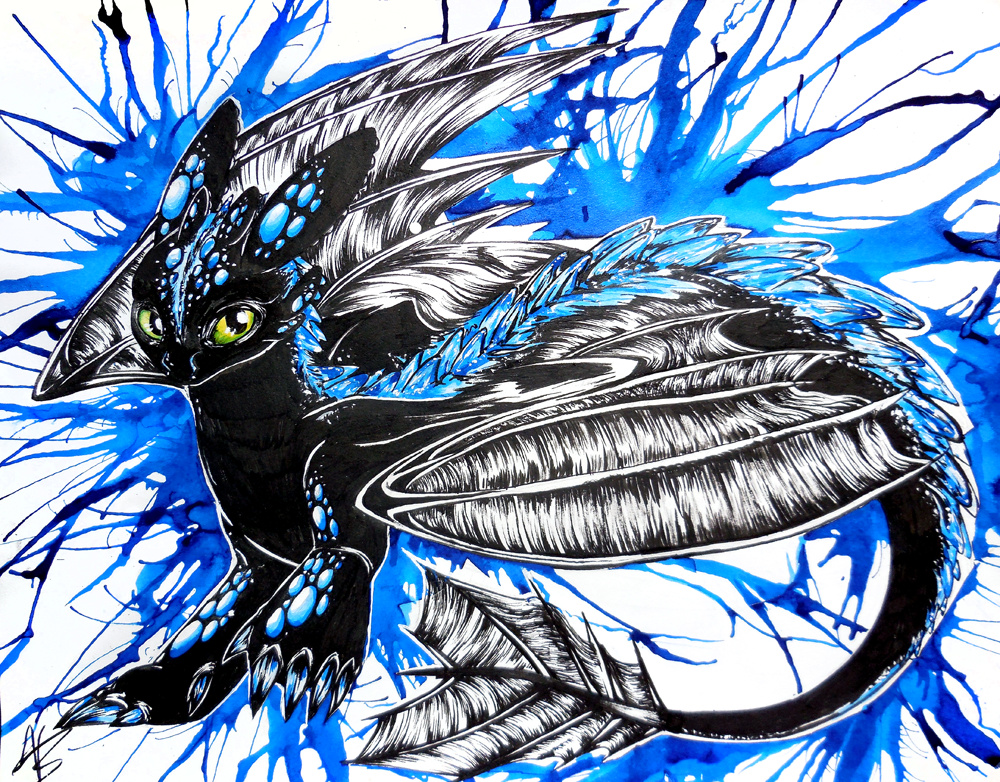 Very eye-catching and bold – makes me wish that the other dragons and Vikings, had been drawn by the artist like this as well. It would make an interesting and unique kind of trading card set.

Dragons of Berk – by ArachRoy 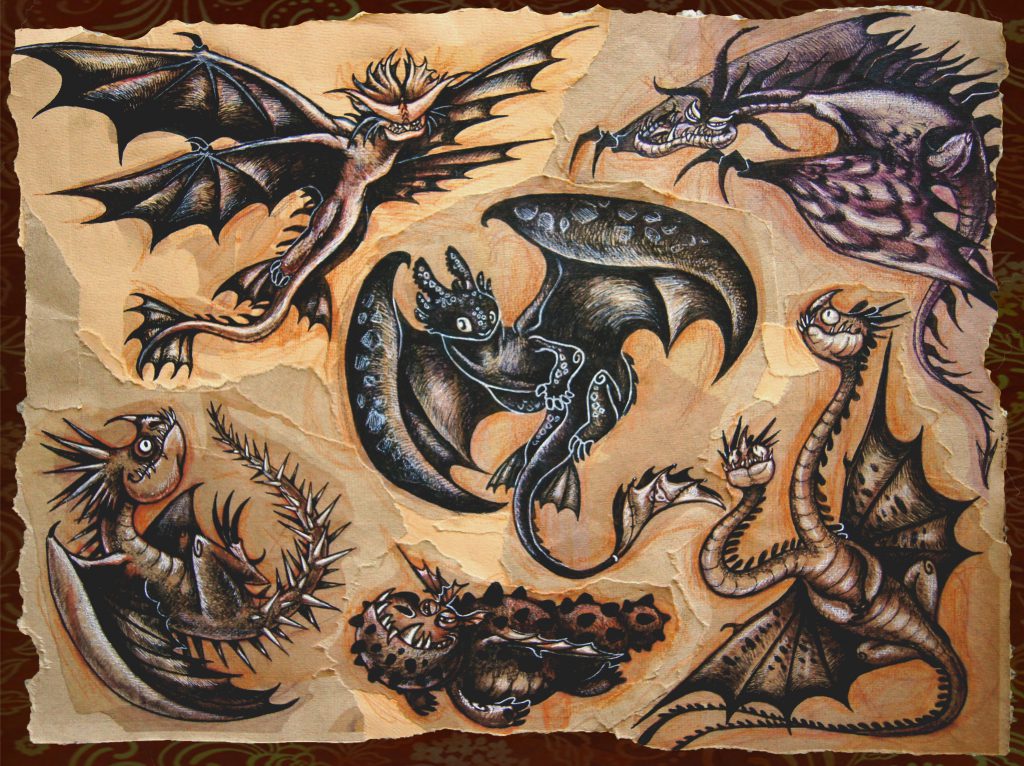 I can imagine that it would be nice for a fan, to think of this as drawings made by the “real” Hiccup. He would have carefully drawn his dragon-friends on various pieces of parchment scraps, and then asked Toothless to lick them so they can be glued onto a bigger piece for display, or safekeeping inside the Viking’s Dragon Manual.

We Have our Dragons – by Foxi Loxy 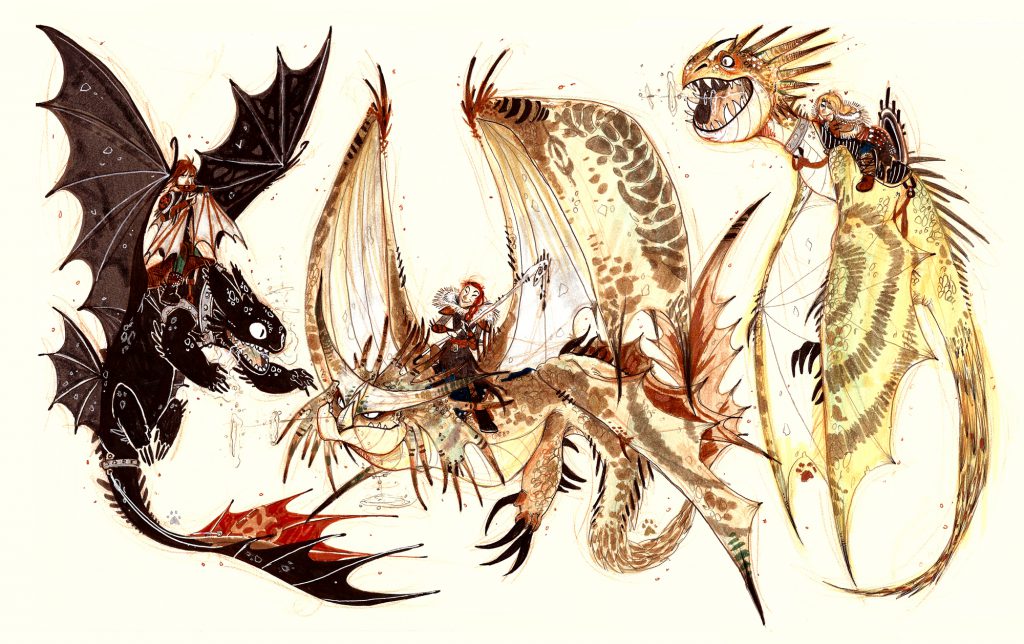 This looks like something that a DreamWorks artist drew (only even better). It’s different, but I like it! 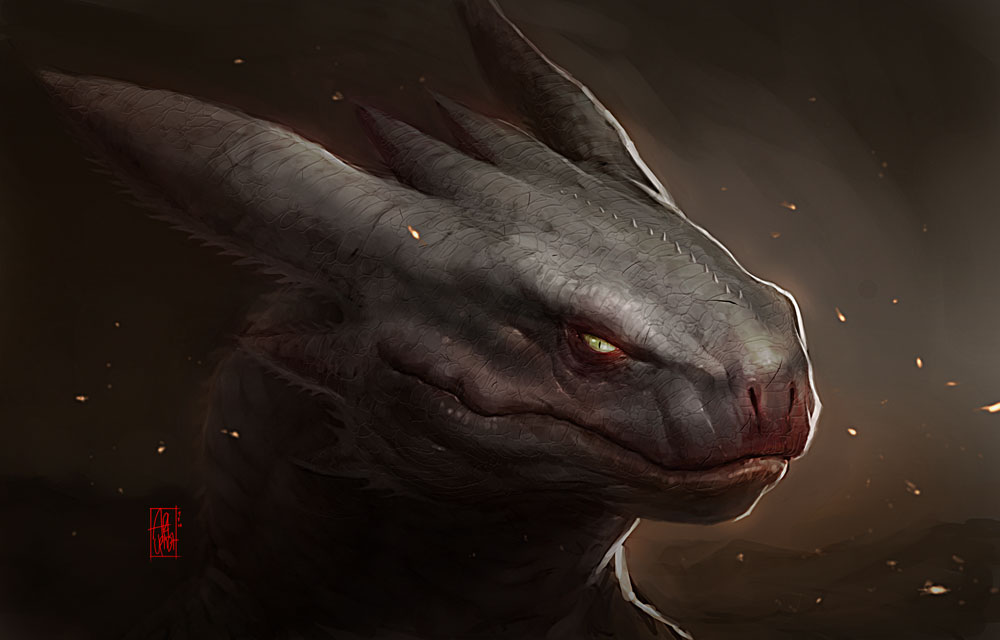 I imagine this is what Toothless would look like after a decade or two of hitting the underground bodybuilding scene. This is probably what hardcore eel abuse does to dragons.
Thank goodness he met his best friend Hiccup, and managed to stay away from darker temptations. Many young dragons are not so lucky.

Logo of Night Fury – by DanGref

While I like the look of Celtic/Viking/Maori styles of art, many artists’ interpretations of it can look a bit generic.
Maybe it’s because this is a drawing of the Night Fury dragon, but it really stands out to me. I like it! 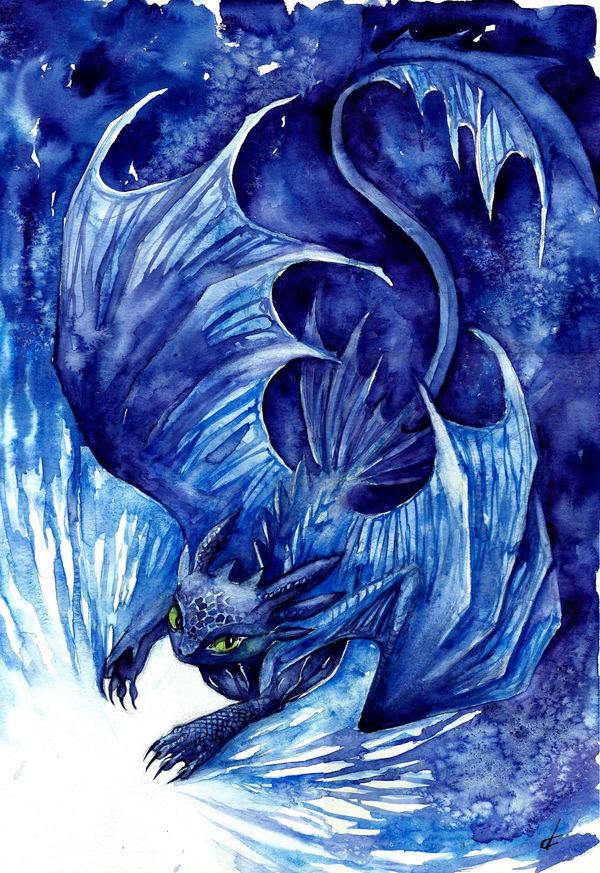 This picture reminds me of the tie-dye shirts me and my high school art class made! This painting would have looked great on my shirt!
Oh well, I think I still got an A- or B+ regardless, for my shirt. It had a small patch on it that wasn’t dyed properly, so I gave it to my dog and never dyed anything again. An F for persistence!
(Dogs are mostly colour blind, so he was happy.)

Everyone needs a little time to feel normal again – by Dreamsoffools 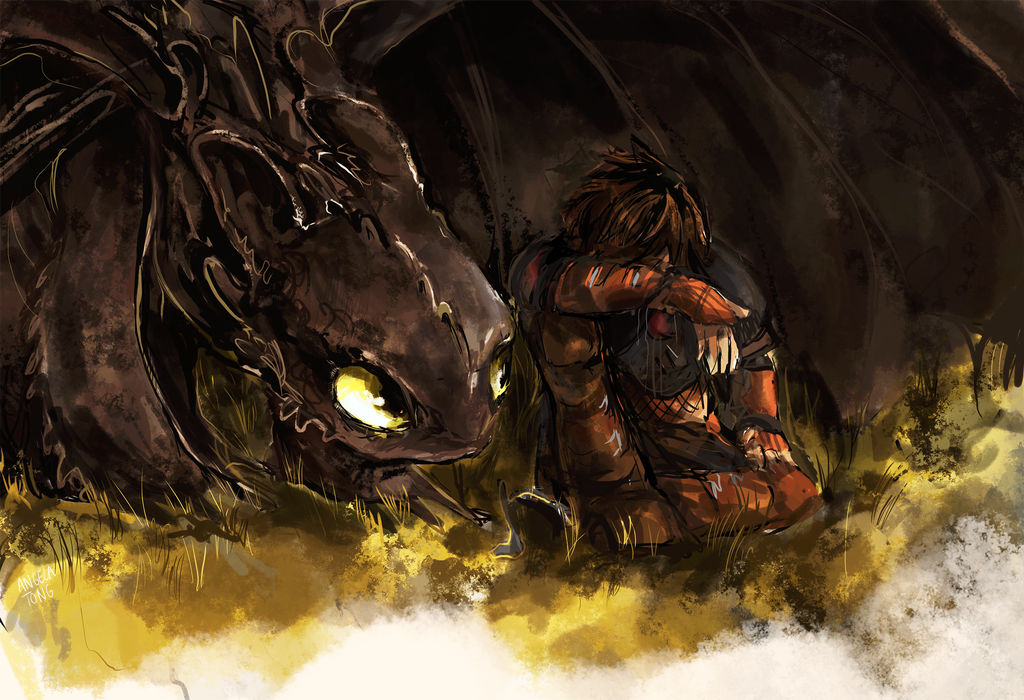 This drawing could show Hiccup being overwhelmed and sad over any number of things (especially since not exactly having had an easy life). However, Hiccup never seemed to have any time to grieve for the death of his father, in the second (or third) HTTYD movie. Perhaps this picture fills one of those missing scenes.
The emotion is expressed well, I feel. I also like how everything is shown in the drawing, without needing to go into great detail, although it would have been nice to see just a little bit more of Hiccup’s forehead.

This is Berk – by Avafury 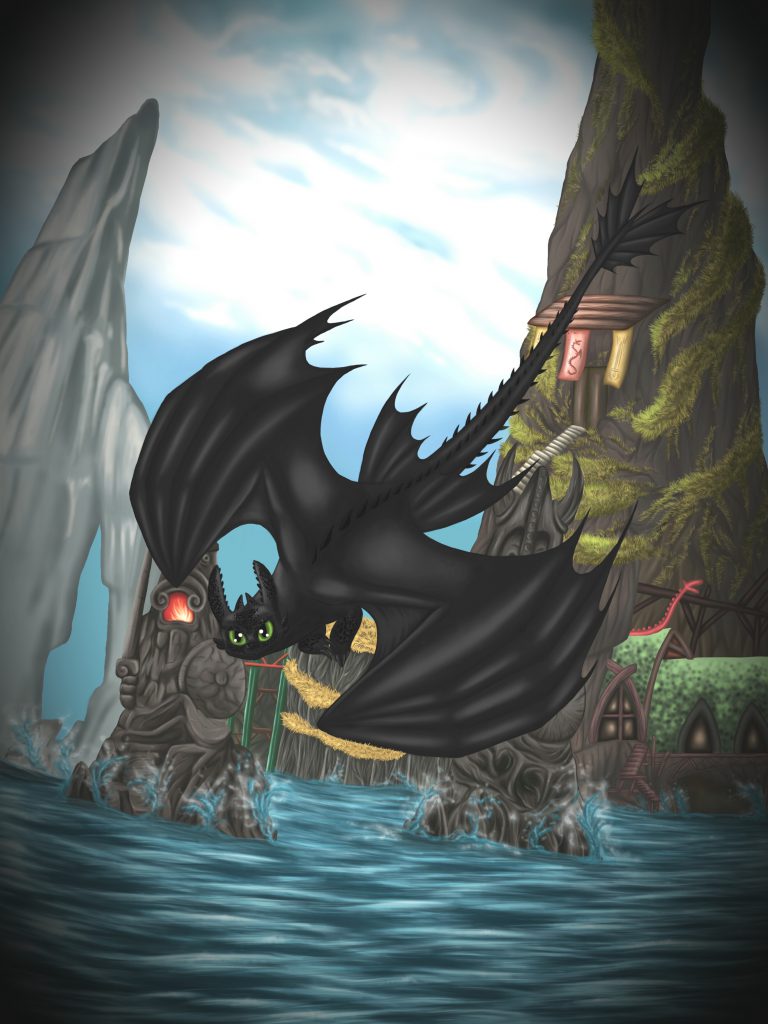 In a way, this is another one of those artworks that to me look like they were drawn long ago, so for that reason alone I already like it – makes the HTTYD story seem more “authentic”.
This painting gives an oversight and “snapshot” of Berk – maybe to outsiders, so they know what sets Berk apart from everywhere else, but also how to recognise it and what to expect?

A Wild Toothless – by JazzTheTiger 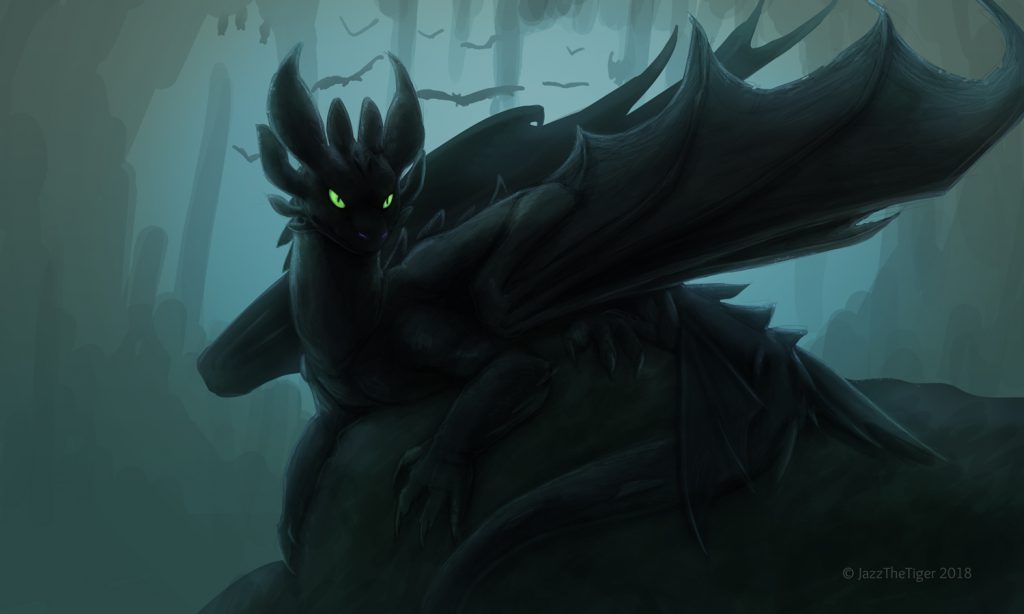 Toothless being quite impressive, inside a spooky cave filled with huge bats. Living inside a cosy Viking’s hut was certainly a step up for Toothless, I must say. Bat poop apparently smells very acrid. 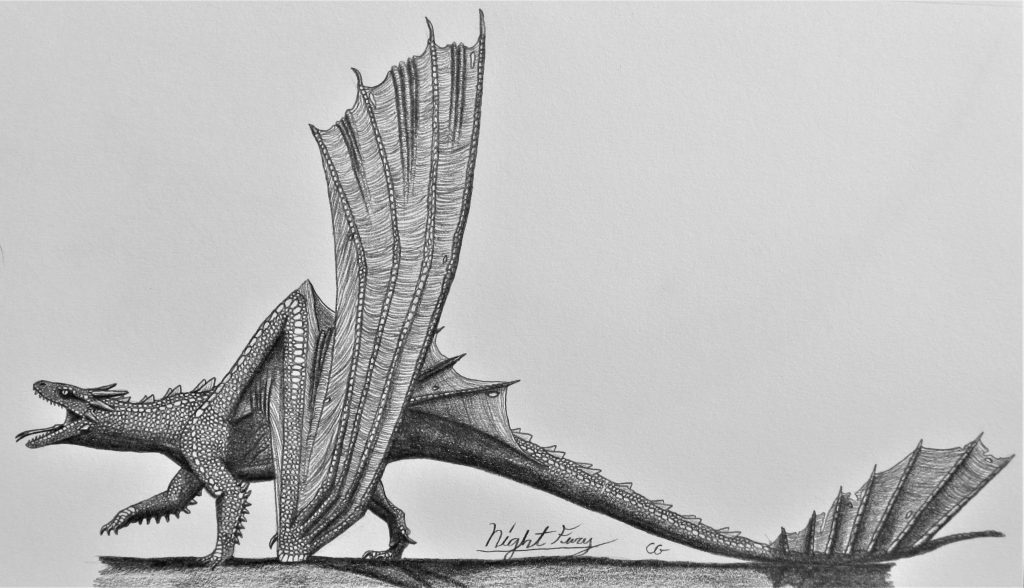 Like an illustration from a serious scientific book on dinosaurs. Nice! 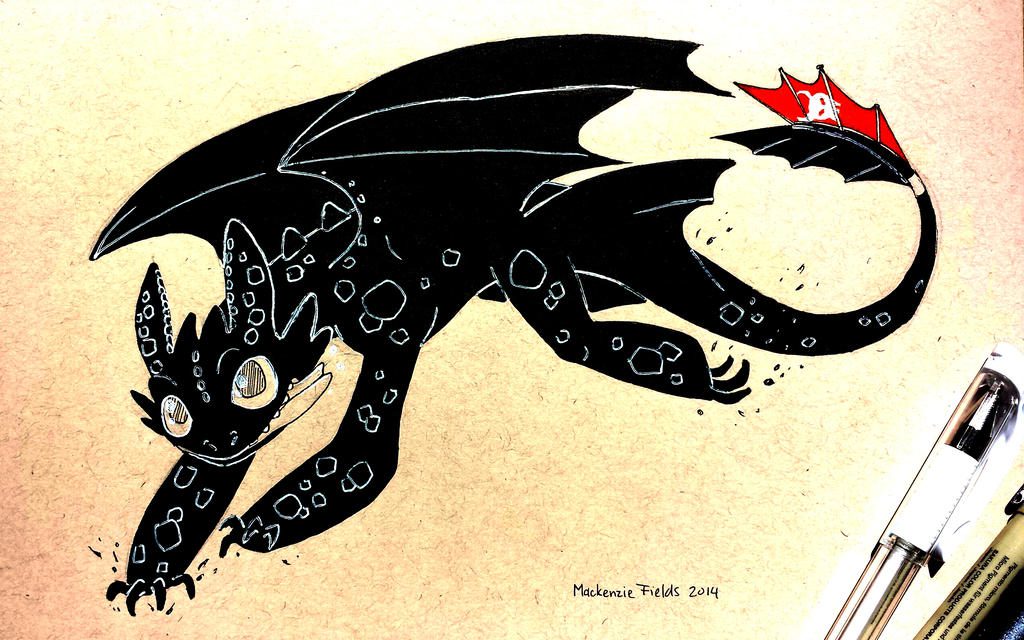 Simple but bold, unique and still recognisable: it’s different, but I like it.

The First Encounter – by Keyade 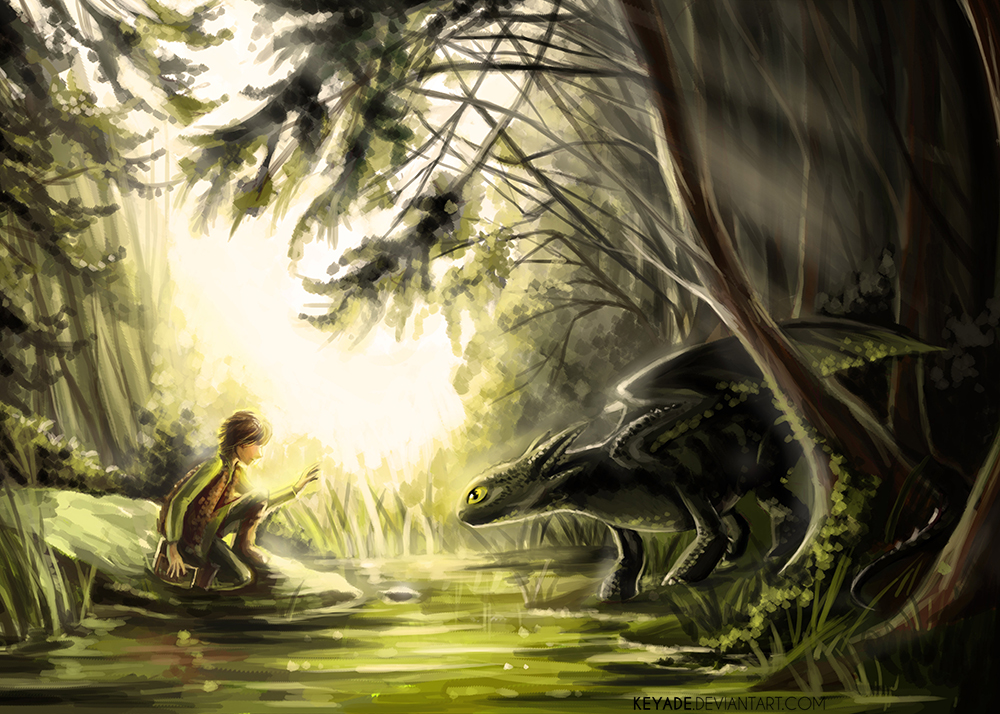 The first encounter that might have happened if Hiccup hadn’t shot down Toothless, and was out studying dragons instead? Surely, they would have become friends regardless, right?

I’ve got a soft spot for paintings with bright sunshine, golden colours, strong contrasts and shiny things in them – especially HTTYD paintings. This one “ticks a lot of boxes”, for me.

In my next favorite batch of HTTYD fanart, I’ll post fanart that doesn’t quite fit within the official story. Why doesn’t it quite fit?
You’ll find out soon!
If you have suggestions, would like to recommend some art or submit your own, feel free to get in touch or just leave comments on this post, below: